For Stephen Bunting, the New Year means a fresh new beginning. With that, The Bullet has boldly underlined his intent by signing a management agreement with Mark Dean.

Having worked alongside one another over an extensive period of time, itâ€™s a solidifying arrangement which both parties have been extremely interested in completing.

Now finalised, the agreement now allows Stephen to fully focus on playing darts, leaving Mark to organise the business side.

A delighted Bunting said: â€œIâ€™ve known Mark for a long while. In that time we have built up a very good friendship and he has become someone I trust.

That word, trust, is key for me. I can relax, assured that my affairs are safe in his hands, leaving me free to work on improving my game.

â€œHaving someone in my corner who believes in my ability is vital. Iâ€™m confident with this new arrangement, I can push on and fulfil the ambitions I still have in darts.

â€œItâ€™s always been my intention to win trophies in the PDC. I genuinely believe this relationship gives me the best possible chance to do just that.â€

Equally as thrilled was Mark Dean. Having worked closely alongside professional dart players in the past, Stephen is one heâ€™d always admired and recognised the huge potential.

Speaking upon the deal, Mark said: â€œIâ€™m extremely happy that Stephen and I have concluded our management contract agreement.

â€œUnderstandably, since effectively becoming a free agent, Stephen has had many offers on the table. So naturally, Iâ€™m delighted he opted to take my offer up.

â€œAs a former world champion, itâ€™s an honour and a privilege to be representing a player of Stephenâ€™s calibre.

â€œIn my eyes, heâ€™s a born winner. Last year was a successful one for Stephen – reaching the semi-finals of both the World Championship and Grand Prix as well as claiming another pro-tour title.

â€œNow is the time for him to push on and go that extra step. Stephen is a player who has all the talent and ability to win silverware and itâ€™s our collective ambition to turn that desire into reality.â€ 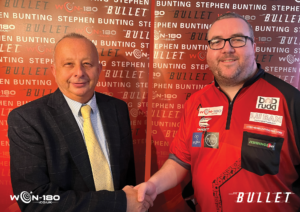 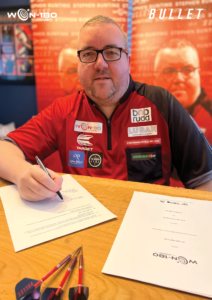